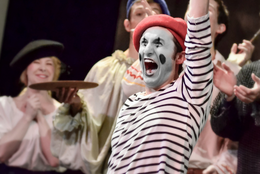 
The Media Theater opened their 20th season with the hit musical comedy, Monty Python's SPAMALOT (based upon the film 'Monty Python and the Holy Grail'), and Sam was overjoyed to join the ensemble.

The production starred Tony-nominee Ann Crumb as the Lady of the Lake. 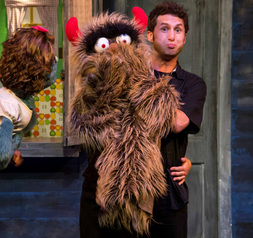 "Of particular note was ... the non-stop entertaining antics of Sam Nagel as Nicky, Trekkie Monster, and one of the hilarious Bad Idea Bears." - Edge Magazine

Sam appeared as the Storyteller, Simon the Valet, and the King in Mazeppa's Children's Theater production of Rapunzel, a musical by the creators of the hit TV show, •F•R•I•E•N•D•S•, which return later, in November, in Upper Darby!
Sam was thrilled to be a part of the First Philadelphia One Minute Play Festival, presented through InterAct Theater Company. The festival featured 80 brand new One-Minute Plays by close to 50 playwrights from Philadelphia’s growing pool of exceptional contemporary writers; among them are some of the most important artistic voices in the nation. Read more about it in this Philly.com article!

Sam returned to the New Candlelight stage for the first time since 2010 as Aaron Schultz in their energetic production of Legally Blonde: The Musical, directed by Dann Dunn 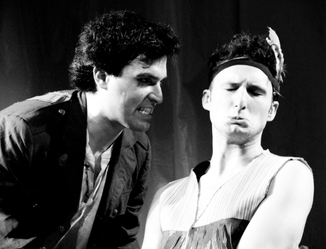 Check out the Playbill.com article and photo gallery!

The men of A Stoop on Orchard St.
OCTOBER - DECEMBER 2012

Sam starred as Hiram Lomansky in the tour of A Stoop on Orchard Street, which focused on a family of Jewish immigrants living in Manhattan in 1910. The production played at the National Museum of American Jewish History in Philadelphia, the Museum of Jewish Heritage in New York City, and many other venues throughout the East Coast. 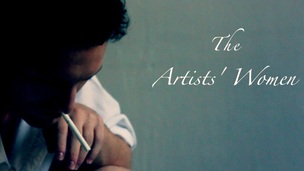 Sam appeared as Picasso/Monet in the world premiere production of The Artists' Women, produced by the YeuxVeuxBelle Collective. The play was presented in the 2012 Philadelphia Fringe Festival. 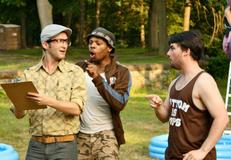 Sam appeared as Peter Quince in REV Theatre Company's exciting production of A Midsummer Night's Dream. After a well-recieved premiere in the inaugural Scranton Shakespeare Festival, the play enjoyed a brief run in Philadelphia. 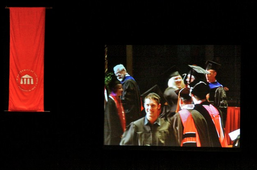 Sam graduated from The University of the Arts with a BFA in Musical Theater! 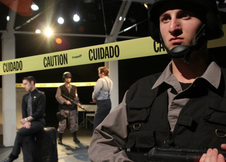 The opening scene from TERRORISM
MARCH 2012 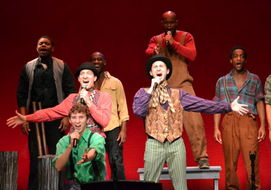 Sam starred as The King in the 2012 UArts production of Big River. He had the incredible pleasure of working alongside Barrymore Award winner Ben Dibble as The Duke, and Tony Award nominee Forrest McClendon as Jim.